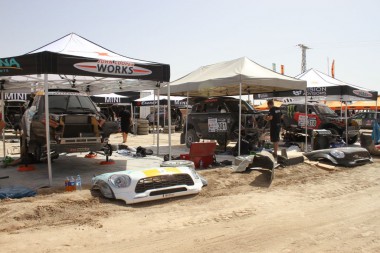 There was a lot of sand today as drivers crossed the erg of Chegaga. This didn’t help Giniel De Villiers’ Toyota. The South African suffered power steering problems. But still managed to come in 30 minutes behind Nasser Al-Attiyah (Mini), the Qatari won his second special today.. after catching up with Orlando Terranova (Mini), who opened the track, after winning the previous day, Behind the Minis, Lucio Alvarez on Toyota. If the current bike podium represents three nationalities of the “old continent” in the car’s, it could hardly be more cosmopolitan.

Thirty minutes! For Giniel De Villiers, who’d, started well. But between the CP1 (km 71) and CP2 (km 134), everything went wrong A power steering malfunction when you are faced with a hundred kilometers of dunes in front of you , is not a great situation to be in,. 16’33 seconds behind at CP2 and 25’29’’ at ‘CP3 (km 189) and 30’ upon arrival. it’s over! But at least now the engineers at Toyota and Overdrive are aware of the problem.

This leaves us with a duel between the Minis and the gaps are mini too… Al-Attiyah was only 40 seconds ahead this morning. With his victory and 2’50’’ extra, it puts Orlando Terranova, out of his comfort zone with 3’30” It’s better to have them. But it’s still an open race.

” good navigation today says “Orly”. It was not an easy day, bumpy at the beginning, there was also plenty of off-piste and a lot of dunes. It was fun to drive! Nasser came back very strong, but it’s not that bad for us. As opening the track, we could have lost much more time. The good thing is that we do not have to do it tomorrow. ”

If De Villiers is not there, who takes third place? Toyota of course! Lucio Alvarez is third in the stage, at 5’11 ‘, while Bernhard Ten Brinke is third overall at 27’42’. 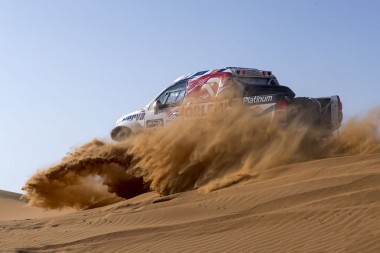 “We started fifth this morning, said Alvarez, and we have not stopped attacking. In the first part, I had a low temperature on the rear differential but everything went well. It was a nice special with beautiful dunes. Unfortunately, we lost a lot of time early in the rally, because we had steering problems. ”

Well, well … another power steering problem on a Toyota. Bernhard Ten Brinke, a former winner of the event, himself, returns to third place overall. Sixth of the day at 9’31 ‘ from Al-Attiyah, (regular). He had a little mishap today: “It was a difficult stage, with lots of dunes. We stopped at one point. The helicopter flew over us, I looked up, and there was a lot of dust, so I stopped on a small dune. We lost a few minutes “said the Dutchman on arrival. Indeed, he hovered until CP3 between the third and fourth place, where he was at 7’45 seconds behind Al-Attiyah.

Behind Alvarez in fourth place, we find Juan nani Roma. The Mini driver had to stop his special yesterday because of a gearbox problem, only 11 kilometers from the start. Like De-Villiers, the former Dakar winner will now have to fall back on stage wins.

A fourth place overall for another Dutchman, Erik Van Loon (Mini) at 31’14 ‘, while De Villiers-landed just behind in 32’20’. Vladimir Vasilyev (Mini), leader of the World Championship, is currently 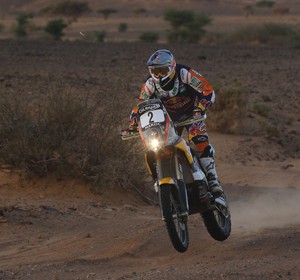 After three days of Honda’s dominance the KTMs take over. Marc Coma was never far away, but even with a 30’ penalty,...
Copyright 2011-2016 Rallyraid.net - RISE Network. All Right Reserved.
Back to top