After Saturday’s 158 km special, Finland’s Tapio Lauronen was the fastest while his compatriot Tapio Suominen took the lead in Baja Russia – Northern Forest, first round of FIA World Cup for Cross-Country Rallies. 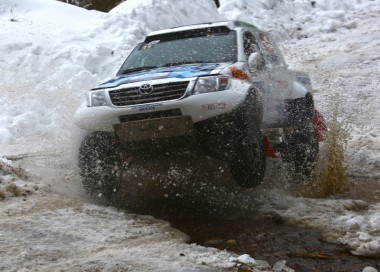 Baja Russia – Northern Forest continued Saturday morning with one 158 km long special through the remote forests of Karelia, in the Northwestern edge of Russia. Weather was once again not in favour of the race: with temperatures above zero and melting snow on track the conditions were everything but easy.

Finns occupied the podium of Baja Russia –Northern Forest clear on Saturday: Tapio Lauronen (Mitsubishi) clocked the fastest time ahead of compatriots Jouni Ampuja (Mitsubishi) and Tapio Suominen (Toyota). Suominen, who had no major problem today apart from sliding off the track two times, took the lead in bothe overall and in the World Cup classification.

Tapio Suominen: „In the stage was everything. It was narrow, slippery, with a lot of snow, I was the first car out and I caught two safety cars on the track. There were tricky corners, i went off two times and lost some time, but no other drama. Everything’s going well. The track was a big mess. It’s like driving in the mud, and it’s not easy. Maybe tomorrow will be easier.” 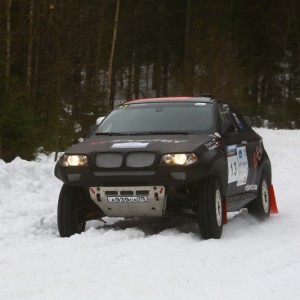