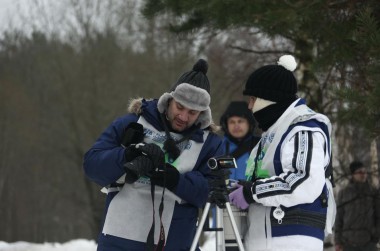 Cross-country rally is not limited only to fast cars, drivers, co-drivers, and treacherous routes. It comprises so much more than that, among all other things media – journalists, photographers, and cameramen coming up with all the adrenaline-charged shots, TV footage, chronicles and articles.

More than 60 journalists have already been accredited at the baja Russia – Northern Forest 2015, among them 10 photographers, 10 TV companies both national and regional including Russia-24, NTV, REN-TV, LifeNews, Peterburg – 5th channel, Karelia State TV Channel, and others; sports reporters from newspapers, sports magazines and websites.

The foreign media are represented by the Italian Fuoristrada web, the international RISE Network media group, by the Czech photo agency MCH Photo, the Dutch RTL7 and the Latvian production Chetto TV.

A 25-year old photographer from Czech Republic Marian Czitka, a winner of the Golden Eye award with his photo of Dakar’s winner Nani Roma, is duly considered one of the best photographers in cross-country rallies. 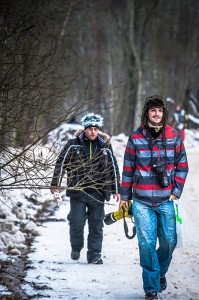 Marian Chitka: I took up photography not long ago, in 2010. I had had a camera before but hadn’t been using it too much. I got my first real photo camera as a Christmas present from my brother. Going to Dakar in 2010 I wasn’t thinking of clients or specific shots, I was simply enjoying Latin America like on a holiday. But it was the moment when I came to love photography. After that I went to Dakar three more times, in 2013, 2014 and in 2015, and I do hope that I ‘m going there next year too and the year after that, and so on. Starting 2011 I have been taking photos at FIA World Cup rounds, and with the baja Russia – Northern Forest 2015, my fifth season is opened. Moreover, I started working with Monster Energy. They organize events of other kinds too, like motocross, rally-cross, speedway, and so on.

I have visited Russia 4 times, 3 visits to Silkway Rally and once to the last year’s Russia – Northern Forest. Unfortunately it was too warm and the snow was scarcer than I’d wish. I hope this year will not disappoint us in snow. Pictures of race cars on snowy background are just perfect! They are something very special, not an everyday stuff. The cars are drifting in every single turn, the snow is flying everywhere, and making a perfect shot is an easy deal. The only problem here is temperature, the fingers are frozen numb. I guess taking pictures in the dunes is a bit easier.

Sergey Belostotsky, the deputy editor of the Ex–RoadMedia web portal began shooting races in 2000, and made his debut in cross-country in 2009. Last year, his short film Big Toys was awarded the first place in the 4x4sports nomination of the Off-road Film Festival. 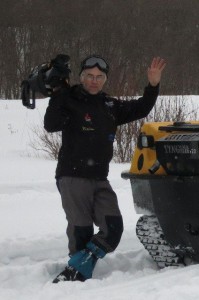 Sergey Belostotsky: Shooting races and cross-country in particular is very specific. For example, shooting Northern Forest and, say, Abu Dhabi Desert Challenge are 2 completely different matters. I for one, like heat and deserts, it’s pretty easy – drink more water and minimize your physical activity. In winter, it’s another thing! You have to move around a lot not to freeze to death, and moving around at Northern Forest is a problem. Moving along the route between the upcoming crews in search of a better angle you should be listening hard, and the moment you hear the approaching car you must dive into the snow, and sometimes a very deep snow it is! And you might think the powerful sports cars’ engines can be heard from afar, yet in the depth of the woods you have only a few moments’ warning.

Not to mention the glidepaths where the route turns, they cannot be explained by physics and yet should be taken into consideration when shooting the cars’ drifts and side-slips. All in all, you should not only exercise your creativity and talent, but think of safety too, for baja Russia – Northern Forest it’s a very pressing question!

The best video materials made by Sergey Belostotsky at last year’s baja can be found on: 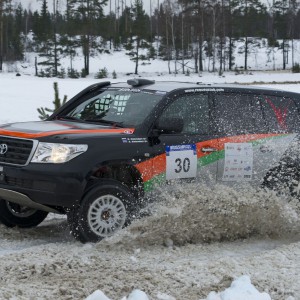 RE Autoclub is a Latvian racing team with a 20-year history of racing in international competitions and more than 10 years...
Copyright 2011-2016 Rallyraid.net - RISE Network. All Right Reserved.
Back to top