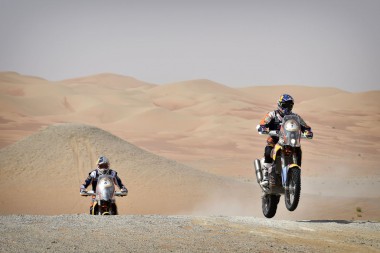 Red Bull KTM factory rider Marc Coma of Spain sealed an early victory in the Abu Dhabi Desert Challenge on Thursday after organizers cancelled the final scheduled stage. A sandstorm had made support for the riders impossible. Coma’s win also lays the foundation stone for his bid to secure his seventh world championship title.

Coma wrapped up the win thanks to his 11 minutes 55 seconds lead at the end of Wednesday’s Stage Four. It was his eighth win at this event, making him the KTM rider with the most Desert Challenge victories. KTM riders have won the event every year except three since motorcycles were introduced into the program in 1995.

Marc Coma: “Today they has to suspend the stage because of the weather. This mean’t that we returned to Abu Dhabi on the road. The truth is that the conditions were bad. I am happy and proud to have achieved this eighth victory in the Abu Dhabi Desert Challenge. It was very important to continue in this way, especially after the win in the Dakar. We have picked up a lot of points for the championship and now it’s time to rest and think about the next round in Qatar.”

Austria’s Matthias Walkner, the latest signing to the KTM factory team and one who also delivered an impressive first Dakar Rally in January showed his potential by taking the Stage Four victory. He came in third in Monday’s stage to be fourth overall but then encountered a technical difficulty on Tuesday that put him out of contention. His stage win on Thursday underlined that he is a future podium contender.

Coma rode his usual tactical race reflecting the multi Dakar Rally winner’s rich vein of experience. He secured the first stage win, rode into a favourable position for a good start in Stage Two, then rode a compact and close second in the next two stages, each day consolidating his overall lead.

It was also a good rally for Sunderland who took second in the first two stages and moved from third overall to second when Coma’s main rival Paolo Goncalves of Portugal experienced technical difficulties in Stage Four.

Riders had to contend with extreme temperatures of up to 45 degrees Celsius, conditions Coma described on Wednesday as ‘like an oven”, a day that other KTM riders Sunderland, Quintanilla, Al Balooshi and Walkner all agreed was very tough riding in the dunes. Coma after the fourth stage: “I rode in a group of five and in the earlier part across the open desert we managed to get a good rhythm going.  I then took it easy because of the extreme driving conditions and the heat.”

Please Note: Organizers cancelled the final stage of the 2015 Abu Dhabi Desert Challenge when a sand storm made it impossible to provide the necessary support. Results as at the end of Stage Four therefore stand as final results

Robby Gordon Introduces the Pro Unlimited Class to the Mexican 1000 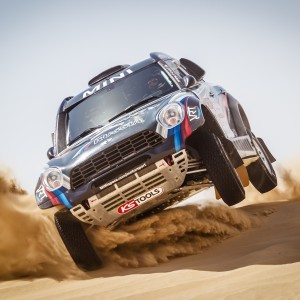 The MINI ALL4 Racing was the car to beat at the Abu Dhabi Desert Challenge 2015. The competitors returned to Abu Dhabi City...
Copyright 2011-2016 Rallyraid.net - RISE Network. All Right Reserved.
Back to top