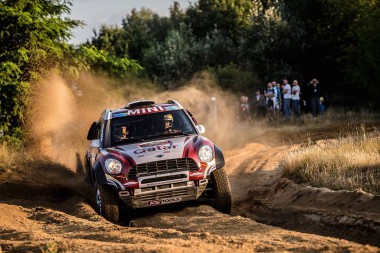 Qatari driver Nasser Al-Attiyah with Frenchmen Matthieu Baumel alongside him took an early lead in the LOTTO Baja Poland. The duo, driving a MINI 4AllRacing won the opening super stage ‘Szczecin’. Current leaders of the FIA World Cup For Cross-Country Rallies were four seconds faster then the Dutch-Belgian pairing of Berhard Ten Brinke and Tom Colsoul (Toyota Hilux Overdrive). Third time was set by a four-time Baja Poland winner Krzysztof Hołowczyc, this time with Łukasz Kurzeja, also in a MINI.

Since the early hours the rally park located at Szafera Street in Szczecin was teeming with life, filled with both competitors and fans. After the start ceremony, located at Szczecin’s most glorious site – Wały Chrobrego – the competitors returned to the rally park area where the super stage was held. Two-time Dakar Rally winner Nasser Al-Attiyah met the expectations and won the stage.

After the Friday warm-up Krzysztof Hołowczyc is the top Pole in the rally, two seconds ahead of Marek Dąbrowski (Toyota Hilux Overdrive) who lies fourth in the final results. Martin Kaczmarski, who returns to competition after recovering from an injury is fifth. Kaczmarski together with Hołowczyc, Jarosław Kazberuk and Robin Szustkowski are members of the LOTTO School of Champions team.

In the evening a draft of the second leg starting positions took place in the rally park. On Saturday, 29th of August, Krzysztof Hołowczyc will be the opening car. The four-time Baja Poland winner will be followed by Berhard Ten Brinke, Nasser Al-Attiyah, Marek Dąbrowski, Martin Kaczmarski, Erik Van Loon, Vlasimir Vasilyev, Adam Małysz, Włodzimierz Grajek and the top ten will be completed by Miroslav Zapletal.

After the morning rain the weather was sunny in the afternoon and according to the forecast it should remain like this over the rest of the weekend. The super stage was only a warm-up before the actual rally. On Saturday, 29th of August, the rally convoy will move to the military training ground located nearby Drawsko Pomorskie, where a 144-kilometer long special stage is going to be held. The stage is set to be run two times. A 65-kilometer stage called ‘Dobra’, as well run twice, is set to be held on Sunday and the LOTTO Baja Poland winner will be know on the same day around 2pm local time.

-It wasn’t an easy stage. There was a tree at one corner and we had to reverse. After that it was OK. I’m quite happy.

-I’ve been out of the car for six months. I’m doing my best. I was in the bushes and i think only a miracle helped me. There’s something with the steering but all in all it’s alright.

-We have lost a little bit. We went out wide on a tight corner and almost ended-up in the trees. The proper rally starts tomorrow.

-It was a good stage. Very bumpy and difficult, with enormous wheel-ruts, but a good one.

-It was a surprisingly tough stage. We were close to the trees on few occasions and I had to run over one.

-The first stage was a great surprise to me. There were huge ruts. I didn’t expect that. We run out wide at one corner and lost around 10 seconds, but overall I’m happy. The car performed well and I hope it will stay like this.

After a two-year-break, the Silk Way Rally is back on tracks. During all that time, the organizers have kept working on a new concept,...
Copyright 2011-2016 Rallyraid.net - RISE Network. All Right Reserved.
Back to top