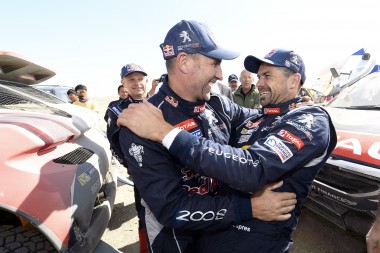 Team Peugeot Total’s Stéphane Peterhansel and Cyril Despres overcame the exceptionally varied challenges thrown at them by the atypical China Silk Road Rally to collect a highly encouraging one-two finish for the PEUGEOT 2008 DKR at the end of the 5, 442-kilometre event!

Team Peugeot Total enjoys a successful motorsport record in China, including endurance racing wins with the Peugeot 908 at Zhuhai in 2010 and 2011. This year, the team returned to the brand’s biggest market to take on – and win – a challenge of a very different sort: the China Silk Road Rally. This cross-country rally, which ended today (Friday, September 11), will go down in Peugeot Sport history as the backdrop not only to the PEUGEOT 2008 DKR’s maiden victory but also to a resounding one-two result.

En route to picking up the top prizes at the finish in Dunhuang, Stéphane Peterhansel/Jean-Paul Cottret (#181) and Cyril Despres/David Castera (#182) completed 2, 000 kilometres of competitive action, plus a further 3, 479km in liaison sections, in the course of the two-week event. Stéphane Peterhansel appeared at the top of the leaderboard on the second day and maintained his strong pace to add six more stage victories to the PEUGEOT 2008 DKR’s maiden stage success on SS2. He went on to collect his first win on this rally, a month after celebrating his 50th birthday!

The PEUGEOT 2008 DKR’s one-two finish coincided with the first major result for Cyril Despres on four wheels. Ever the perfectionist, the studious ex-biker made progress every day along with his new co-driver David Castera. The pair’s determination was rewarded with their first stage victory on SS11, which was followed by another on SS13. In all, they contributed to five one-two finishes for Team Peugeot Total in the course of the fortnight. Their consistency saw them emerge in second place after Day 4, after which they succeeded in defending their position until today’s finish.

The long route was extremely varied, although the rhythm was interrupted by the cancellation of Leg 3 and by timetable changes to give the organisers time to check that certain portions remained practicable despite the downpours that fell over the region during the rally. The 2015 China Silk Rally’s menu featured vast expanses of occasionally huge sand dunes, as well as fast, flowing sections, river beds, rocks, stones and even mud. The two Team Peugeot Total crews took all these types of terrain in their stride and were helped along the way by the PEUGEOT 2008 DKRs’ faultless form. Neither Stéphane nor Cyril had any technical issues to report and the changes that have been made to the car’s technical specification proved competitive and reliable.

The 2008 DKR has clearly gained in performance over sand dunes and fast terrain alike. Some of these modifications will be carried over to the new PEUGEOT 2008 DKR 16 which will contest the 2016 Dakar in January. In the meantime, Team Peugeot Total has every intention of savouring the superb run of its two crews in China and their one-two finish before heading back to Europe.

Bruno FAMIN, Director, Peugeot Sport: “The aim of coming here was to clock up the kilometres and gain experience, but we are going home with a fine one-two finish in our pockets. I am very proud of the work that our crews put in, as well as that of the team both here in China and back at base in Vélizy. Everyone has been working very hard on this project for more than a year and today’s result is a great reward for their efforts, even though our number one objective is still the Dakar, of course. There is still a great deal to be done and the challenge is very complex but it’s nice to have today’s result in the bank! Stéphane [Peterhansel] and Jean-Paul [Cottret] produced a remarkable performance from start to finish. They controlled their lead when necessary and pushed when it counted. Their success certainly wasn’t down to luck. Meanwhile, Cyril [Despres] and David [Castera] were outstanding. This was their first outing together, yet they lost no time finding their marks and they meshed together very well. Not only did they follow the instructions they were given but they also notched up two stage wins. A big ‘bravo’ to all four!”

Stéphane PETERHANSEL: “We are proud and delighted to have provided the new-generation PEUGEOT 2008 DKR with its first cross-country rally victory! The last stage was pretty stressful, particularly towards the end. That’s when you start hearing every little noise the car makes. Cyril and David caught us and we ran together to the Stop Control. Looking back, the rally was globally quite long, not exceptionally hard in terms of its distance but great fun to drive, with some absolutely incredible landscapes, including a region where there were both lakes and dunes. Technically, we were hoping for a trouble-free run and that’s what we got. Every morning, we knew we could have confidence in our car and in the amazing job done by the team after each stage. That’s always good for morale. My only regret was the cancellation of SS3 which would have been fantastic over the dunes. My best memory will no doubt be the end of the last stage and the happy expressions on the faces of everyone in the team. That was great to see!”

Cyril DESPRES: “We couldn’t be happier. We weren’t expecting a result like this. It was a long rally, with so many different types of terrain to discover. We were also aware of where we needed to improve as a crew and I have the lingering sensation that I was never able to run at 100 percent over any one stage. Every day, it seemed there was something that prevented us from pushing from start to finish as hard as we might have done. David and I have made progress, though, and the reflexes are coming, like the way we analyse each stage as soon as it’s over, for example. Like Stéphane, I thinks it’s a shame we had to head back to the start on SS3. We had been on the pace on SS2 and that will probably be my best recollection of the event as far as the competitive aspect is concerned. The rhythm of the rally also allowed us to bond with everyone and make the most of the two weeks as a team.” 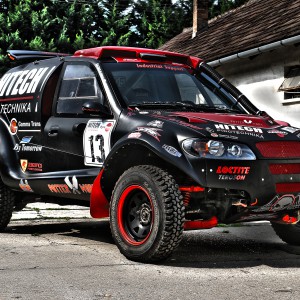 It’s no secret that the members of Sólyom Team really love the atmosphere and tracks of the Nagykálló races, and also...
Copyright 2011-2016 Rallyraid.net - RISE Network. All Right Reserved.
Back to top