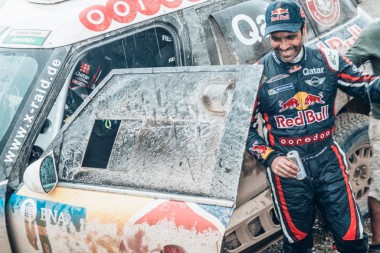 This year’s Dakar Rally kept up its record of delivering the unexpected every single day: in fact, not one of the stages has run entirely according to schedule since the proper action started as the crews left Buenos Aires three days ago.

This has been down to torrential rain causing a headache for the organisers and often a muddy soaking for the drivers. But despite this enormous challenge, Nasser Al-Attiyah is making progress up the leaderboard while sticking to his plan.

Having started today in 10th position overall, the defending Dakar champion arrived in Jujuy – close to the Bolivian border in northern Argentina – holding fifth in the general classification, after chasing his way to third on the stage. Once again the scheduled section was shortened from its original length, with 112 of the original 314 kilometres lopped off the start.

What remained was a fast and rocky WRC-style stage, over challenging mountain roads that allowed Nasser once more to show his versatility over all types of terrain. He finished the rapid stage just two seconds off Carlos Sainz, who was immediately ahead of him.

Together with his French co-driver Mathieu Baumel, Nasser adopted a consistent but risk-free pace in the tricky conditions to move up the field and remain within striking distance of the rally leader: nine-time World Rally Champion Sebastien Loeb.

“We got a lot of rain but it was OK and we didn’t take any risks,” explained Nasser. “I think we did a good job. Our performance is not bad, although it’s clear that the other teams have been improving a lot. But there’s still a long way to do and were going to try and do our best.”

Nasser’s MINI has also demonstrated exemplary reliability so far, which the Qatari points out will be key to success on this year’s Dakar – especially when conditions are as tough as the route has been so far.

“If you have bad weather conditions it makes life more difficult for the car as well as the driver,” explained Nasser. “It’s easier to have a problem or make a mistake. So for now I think our pace is quite good because we have been concentrating on driving safely and looking after the car. This is the plan for now.”

It’s a wise move as tomorrow the rally starts to climb to high altitude in a demanding marathon loop that starts and finishes in Jujuy, with no service at the bivouac. The thin air chokes the engines of power, and a power loss of more than 20% is not unusual, placing a large amount of stress on the engine and ancillary components.

Wednesday will take in 629 kilometres of stage in total, which if it runs according to plan will be the longest day of action seen so far on this year’s Dakar. 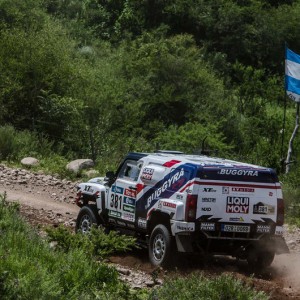 Stage 3 between Termas de Rio Hondo and Jujuy for sure won’t be the best memory from the 2016 Dakar for Tomas Ourednicek...
Copyright 2011-2016 Rallyraid.net - RISE Network. All Right Reserved.
Back to top