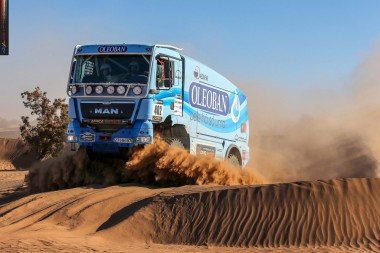 The Portuguese pilot Elisabete Jacinto maintains the fourth place of the truck category after having completed the third stage of the Africa Race that was held today between Tangounite and Assa, Morocco. The special made by 451 timed kilometers wasn’t easy for the OLEOBAN® team that finished the selective sector in 6h20m29s being the fourth fastest truck on the track. With this result the Portuguese are now in the 16th position of the joint classification of car and trucks.

Much of today’s stage consisted of sandy tracks and soft sand dunes and it was quite difficult to the heavy T4 to surpass them. Still, the Portuguese trio made by Elisabete Jacinto, José Marques and Marco Cochinho managed to overcome all obstacles of this third journey: “today’s stage was very hard. We suffered a lot in the stony tracks and in the dunes we had to go very slowly. However, we are pleased. We surpassed the sand areas without getting buried and for us that was a victory. Today, we did our best and I think that, given the difficulties we had, it wasn’t a bad performance. The rally is over and we will have many opportunities to show our value”, said Elisabete Jacinto.

The Portuguese team is leaving tomorrow to the selective sector with a 25 minute gap to the third truck, the TATRA from the Czech Tomas Tomecek. Today the KAMAZ from the Russian Anton Shibalov was the first truck to cross the finish line and was the fourth classified in the joint classification which allows him to take, completed that are three stages, the second place overall.

The Africa Race helds on the first day of the New Year its fourth journey. This will probably be the most beautiful stage of all the competition. It will connect the Moroccan cities of Assa and Remz el Quebir in a total of 409 timed kilometers performed essentially in paths of stone. The first part of the special, until Msied, is already well known by the usual competitors of the Africa Race and is characterized by some sand and navigation. After Msied the layout consists of stone paths and is very winding. 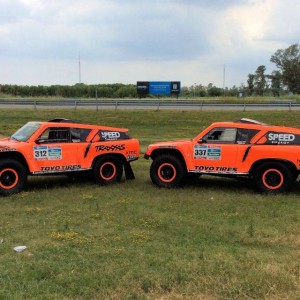 The final day of 2015 was anything but a time to celebrate for Robby Gordon, Sheldon Creed, and their Team SPEED teammates....
Copyright 2011-2016 Rallyraid.net - RISE Network. All Right Reserved.
Back to top