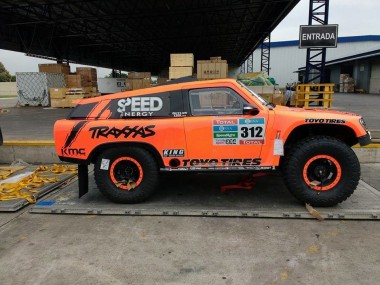 The final day of 2015 was anything but a time to celebrate for Robby Gordon, Sheldon Creed, and their Team SPEED teammates. As millions in South America’s second largest metropolitan area celebrated the New Year with dancing, music, and fireworks. Gordon, and his team spent New Year’s Eve putting the final touches on both HST Gordini Supercars for Saturday’s timed mini-special from Buenos Aires to Rosario. The competitor’s time will set the starting order for Stage 1 of the 2016 Dakar Rally on Sunday.

Different than the last two year’s of the Dakar with Robby Gordon competing in his sole HST Gordini, Team SPEED built an additional Gordini Supercar during the off season for 2015 Stadium SUPER Trucks Champion Sheldon Creed, who will start the Dakar as the youngest ever competitor in the 36-year history of the race.

With two American entries gunning for the overall podium, every available moment until the start of the race will be spent fine tuning and massaging both race vehicles in preparation for the 13 stages of more than 5,739 miles (9,237 KM) of grueling off-road racing through Argentina, and Bolivia.

The logistics of the Dakar are a challenge all in itself; transporting the race vehicles, spare parts, support vehicles and crew from the United States to Argentina for the start of the race takes months of precise coordinating. 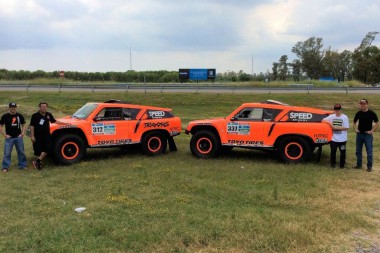 As in previous years, Team SPEED shipped its tools, equipment, and support vehicles from the United States to France in early November to board the ASO cargo ship with the majority of the other 500 plus race vehicles, bikes, quads, and support equipment. From France all entrants’ equipment made the 3-week long trek across the Atlantic Ocean to Bueno Aires for the late December arrival.

Unlike the support vehicles, both HST Gordini’s had a vastly different way of arriving in Argentina for the race. After being trucked to Miami, Fla., both vehicles were loaded upon a cargo plane, and were flown to Buenos Aires in late December, allowing the team the maximum amount of time possible to work on both race vehicles in the Charlotte, N.C., shop. After several days in customs quarantine, the team took delivery of both Gordini’s on Wednesday.

With all team members now in the capital city every nut and bolt of the race vehicles are getting attention to ensure it is ready for the start of the world’s most demanding automotive challenge.

“There is really no racing event like the Dakar, and now that we are entering our 12th Rally we believe we’ve seen just about everything and know how to prepare for it. With the addition of young off-road phnom Sheldon Creed in a second SPEED Energy/ Toyo Tires HST Gordini Supercar Team SPEED bring’s the extra support needed on course we’ve lacked in the last few years. But it’s the Dakar Rally, we know there could be a new challenge around the next corner as Sheldon and I put our SPEED Energy/ Toyo Tires Gordini’s up against the best off-road racers in the world. It’s the ultimate survival test, which is why the Dakar Rally is such a tremendous event,” Gordon Stated. 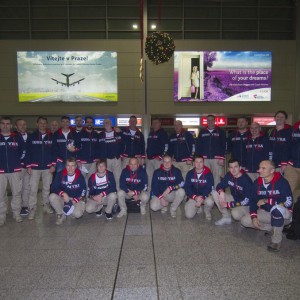 The start of the Dakar Rally is getting closer and closer: the crew of Buggyra Ultimate Dakar, Tomas Ourednicek and Pavel...
Copyright 2011-2016 Rallyraid.net - RISE Network. All Right Reserved.
Back to top