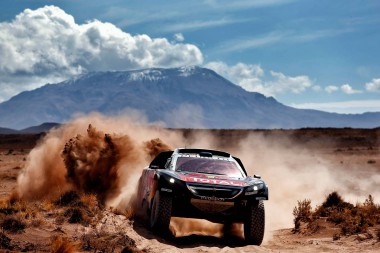 Carlos Sainz finally managed to bring home the bacon, taking the seventh stage of the 38th Dakar. The Spaniard and his DKR 2008 netted the sixth consecutive win for Peugeot, which only failed to win on the opening day. Sébastien Loeb wrestled the overall lead back from Peterhansel. In the motorcycle category, Antoine Méo took his maiden Dakar win at the end of a shortened stage.

One could be forgiven for thinking the 38th edition of the Dakar is a Peugeot parade. Look a little closer, though, and you will see a clash of titans between the three teammates of the Lion brand. Sébastien Loeb fired the opening salvo this morning by posting the fastest time at CP1. He doubled up on his performance in the second sector, but even that could not keep Carlos Sainz down. Loeb’s former teammate in rallies, also a world rally champion, pulled out all the stops and went one better than the driver from Alsace by flawlessly navigating the final part of the special and winning the stage by 38 seconds. Stéphane Peterhansel was unable to keep up and gradually conceded ground, although he remained within striking distance.

However, Peugeot was once again afflicted by minor mechanical problems. Loeb, who had accelerator trouble yesterday, had to cope with a faulty turbo management system, as he explained at the end of the stage. In the wake of Sainz and Despres’ problems, the succession of little mechanicals is probably keeping Peugeot Sport boss Bruno Famin worried. The DKR 2008 cars will no doubt undergo an extra thorough revision during tomorrow’s rest day… From now until Monday, Sébastien Loeb will be able to savour being in the lead halfway through the race. An outstanding performance already. A new race begins on Monday with a stronger rally raid flavour, more navigation and long off-course sessions. The day of reckoning for Sébastien Loeb, perhaps. Peterhansel, sitting in second place at 2′22″, Sainz at 4′50″ and even Al-Attiyah (Mini) at 17′36″ have been waiting for this all week long…

In the motorcycle category, five-time enduro world champion Antoine Méo won a special in his maiden Dakar today. The shortened stage showed how fast the French rider has adapted to a new field of motor sports and saw him take an impressive triumph. Paulo Gonçalves (Honda), who stopped for over 10 minutes to help Matthias Walkner at the start of the stage, should expand his lead on Price (KTM) and Svitko (KTM) after deducting the time lost in the process from his original time today (31st, 12′57″ behind the winner).

The race was also cut short in the quad category, with the stage win going to Argentina’s Lucas Bonetto. There were no changes in the overall, with Alejandro Patronelli, fourth today, still in the lead with a margin of 3′36″ over his brother Marcos. Russia’s Sergey Karyakin remains third, 7′51″ back. 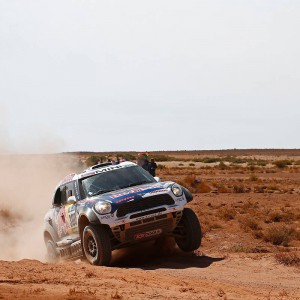 The return to Argentina represented quite a challenge: the drivers had to cover a total distance of 817 kilometres – with...
Copyright 2011-2016 Rallyraid.net - RISE Network. All Right Reserved.
Back to top