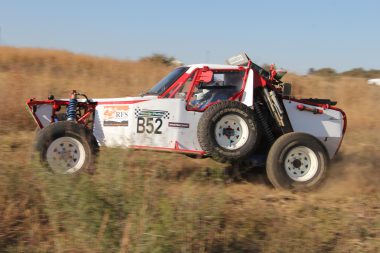 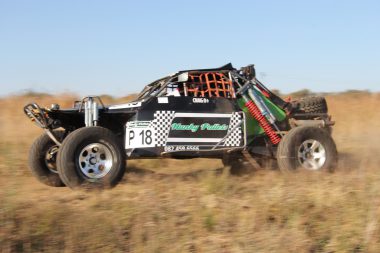 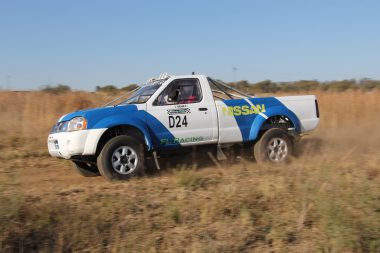 Lady driver Suma Smit is managing director of Hunky Pallets and competes in Class P of the regional championship. The sponsorship is significant in that the proceeds are used to discount regional and club class entries at events this season.

The discounted entries are a major financial saving for competitors in tough economic times. Hunky Pallets also sponsor cars in Class P and Class B in the Special Vehicle category with Francois Smith and Craig Galvin leading the overall championship, and Wolf-Peter Pfumfei a title contender in Class B.

After four rounds of the championship some interesting battles have developed in both the Special Vehicle and Production Vehicle categories.

In the Special Vehicle category a win on the Northwest 250 in Lichtenburg for Francois Smit and Craig Galvin (Hunky Pallets Zarco) boosted their lead in the overall driver’ and co-driver’ championships. Smit and Galvin lead the Midrand based pair of Marthinus and Tiaan le Roux, in a BAT, by 33 points and will be hard to catch over the next three rounds.

The le Roux pairing has a 19 point lead over the Benoni based father and son team of Tony and Michael Gouveia in another BAT. They in turn are under a little pressure from veteran Wolf-Peter Pfumfei (Hunky Pallets WPP/Sandmaster) who is only two points behind with Willem du Toit/Bertus Goussard (CR-T) a further 16 points in arrears.

Smit and Galvin are now 52 points clear of the Gouveias in the Class P championship. But behind them there is a log jam.

Matters could not be closer between another Benoni crew in Derek de Wit/Charles Patterson (Great White), Rikus Prinsloo/Leila Lerm (Aceco) and Vereeniging pair Andrew and Zelma Beer, in a BAT. The trio are bracketed on 53 points and trail the Gouveias by 21 points.

Marthinus and Tiaan le Roux have a healthy 32 point lead in Class B and behind them are drivers who are all in singleseater cars. Vereeniging’s Pfumfei leads John Boxhoorn (WPP) and John Evan in the WPP/Special.

Where the Production Vehicles are concerned an overall win on the Northwest 250 in Lichtenburg took Vryburg crew Pieter Luttig and Victor Fincham   in a Nissan Hardbody running in Class D, to the top of the championship. They now lead a trio of Class E cars led by former national champions Dirk Putter and Koos Claasens (Ford Ranger) by five points, David Huddy/Mike Fehrsen (Nissan) are a further three points adrift, with Theuns du Toit and Arnold Nortje (Toyota) four points behind them.

It is the same story in the Class E championship. Here Putter/Claasens have a 13 point lead over Huddy and Fehrsen with du Toit and Nortje 15 points behind.

Luttig and Fincham have also taken over the lead in Class D. They have a 14 point advantage over youngsters Dylan Venter and Ruan Peirce (4×4 Mega World Toyota Hilux) with Regan Austin and Warren Vos, in another Toyota, trailing the North West crew by 32 points.

The next event on the calendar will be on July 30 in Lichtenburg with the race held in conjunction with round four of the national Donaldson Cross Country Championship. 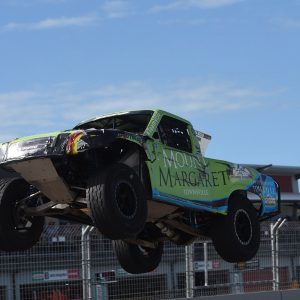