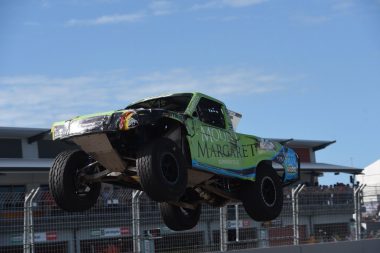 Viso driving the Mount Margaret Residential Estate No. 5 would grab the lead from Gold Coast, Queensland, Australia driver Rob Whyte on Lap-3 and would hold the lead comfortably until Orange, Calif. driver Robby Gordon driving the Hot Wheels/Toyo Tires/Castrol Edge No. 2 for injured SST driver Matt Mingay would advance from his eighth starting position to challenge Viso for the lead on Lap-5 with heavy pressure.

After the competition caution waved Gordon would set up Viso and work his way past for the lead. Working his way thru the field and knocking on the door of the leaders 2015 SST Champion Sheldon Creed looked to battle Viso for second spot from his twelfth starting position. Applying heavy pressure to Viso the two drivers would collide with one other sending Creed spinning into the grass losing track position and sight of the leaders.

As Gordon would remain out front alone, TRAXXAS driver Matt Brabham of Gold Coast, Queensland, Australia would slip into position to challenge Viso for the second position. Racing hard with one another making contact on multiple occasions the two drivers had no idea that they were shortly would be racing for the lead as Gordon would encounter a power steering failure and would see the No. 2 slam the outside wall suddenly.

The damage to Gordon’s vehicle was severe enough to drop him back in the pack and off the pace of the lead. As Viso and Brabham now battled for the lead, Brabham would continue to look inside Viso for the pass but Viso would continue to hold him off until Brabham would make heavy contact with the rear bumper and loose tremendous ground to Viso.

Viso would go on to win his first SST race of the 2016 season followed by Brabham, and Royal Purple Synthetic Oil driver Arie Luyendyk Jr. of Scottsdale, Ariz. who would round out the top three.

Creed would recover from the contact with Viso on Lap-8 to work his TRAXXAS truck back up to finish in the fourth position.

Park City, Utah driver Todd Romano was credited with the seventh position in the Arctic Cat/ Toyo Tires/ KMC Wheels No 33 after making contact with various trucks and falling back in the field various times.

Gordon with the power steering pump failure would limp his battered truck to the finish in the tenth spot to gain valuable championship points.

Gold Coast, Queensland, Australia driver Rob Whyte in the AVA Performance Tuning/Motul Oil No. 11 ran a great first three lap’s leading the race from his front row starting position, but would end up getting passed after encountering a broken axle and retiring from competition. Whyte would be scored in the eleventh position.

Paul Morris from Norwell, Queensland, Australia driving the SuperCheap Auto truck was credited with the twelfth position after breaking a rear end housing on Lap-5 and unable to finish the scheduled amount of laps.

TRAXXAS driver Sheldon Creed would capture the overall win for the weekend with the lowest average between all three races with his win, second, and fourth place finishes, Second was claimed by TRAXXAS teammate Matt Brabham, while the overall podium was completed by Paul Morris in the SuperCheap Auto truck.

The next event in the season-long SST World Championship will see the thrills and spills of the SPEED Energy Stadium SUPER Trucks Presented by TRAXXAS head north of the United States border to Canada for the Honda Indy Toronto July 15-17.

Advance ticket sales to Rounds 13 & 14 are available through the Honda Indy Toronto website at http://www.hondaindytoronto.com 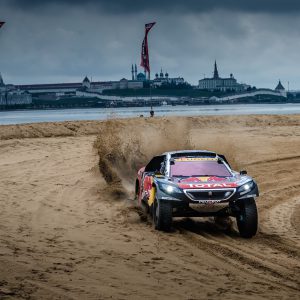